Books By Category
View cart “Chestnut Roulette: The Amazing Story of a Lvov Jewish Youth Who Triumphs Over Adversity, Outwitting the Nazis and Luftwaffe!” has been added to your cart.

In the Biblical story of Sodom and Gomorrah, when God decrees to destroy the cities, the Patriarch Abraham questions and argues with God on behalf of wicked people he doesn’t know, while in the story of the binding of Isaac, he is unquestioningly obedient and submissive when asked to offer as a sacrifice his beloved son who is innocent of any wrongdoing.

The obvious question that arises is – how can the very same Abraham, who questions and argues with God on behalf of wicked people, be silent when asked to offer as a sacrifice his beloved son, innocent of wrongdoing? Abraham’s silence in the story of the binding of Isaac is deafening!

Jeffrey Radon offers an original and unique interpretation of the story of the binding of Isaac in reconciling a contradictory Abraham – as part of a wider argument concerning the nature of the Hebrew Bible.

He argues that in spite of the enormous influence of the Hebrew Bible upon western civilization, nevertheless the Hebrew Bible is a widely misunderstood document – the essence of religion in the Biblical conception is not as widely and mistakenly thought monotheism but moral character and moral action.

Be the first to review “Reconciling A Contradictory Abraham” Cancel reply 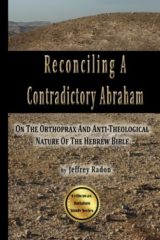 You're viewing: Reconciling A Contradictory Abraham $18.00
Order From Amazon