Ethan Conners is an upper-crust, Orthodox Jewish academy senior who’s also the toughest high school hockey defenseman in Illinois, and he’s landed an NCAA scholarship to prove it. But Ethan never wanted Team USA to select him for the summer Maccabiah Games in Israel. Now, Ethan’s forced to trade a lazy July and angry girlfriend for a shabby ice rink near Kiryat Shemona, and a maniacal coach programmed for victory at all costs. And boarding with a gritty, Israeli family is anything but five-star. Ethan so wants to be done with this tournament and reclaim his social scene in Chicago.

But everything changes when American privilege battles a rugged week of Israeli border town hardship. Suddenly, Ethan’s stressing over his cushy hockey scholarship, while his new Israeli peers face three-year stints defending the Jewish State. And when Ethan catches the eye of a sabra girl with shocking ties to Chicago, his life’s about to change forever, as he’s forced to make a gut-wrenching choice between his dreamy, college free-ride, or the ultimate, Jewish line change.

Be the first to review “Line Change: Israel’s A New Zone For Ethan” Cancel reply 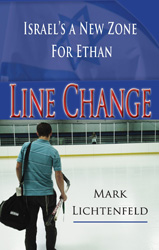 You're viewing: Line Change: Israel’s A New Zone For Ethan $16.95
Add to cart