The Fittest Survivor: A Story of Survival and Remembering – from the Holocaust and post-World War II Era –

While this book is a first-hand account of a Hungarian family destroyed in the murderous Holocaust as well as those who survived, it is also the story of two men from different generations who discover each other’s existence to remember and record their family’s history.

Through the sharp memory of Vilmos Abeles, the author, Sigmund Abeles, discovers his heretofore unknown patrilineal heritage.
At two years old, the author’s mother left his abusive father, taking him, an only child, from Jewish Orthodox Brooklyn, New York to non-Jewish South Carolina, where she raised him with almost no contact with his father or his father’s family.

As the years passed, and the desire to know more about his father’s side of the family grew stronger, Sigmund Abeles discovered his father’s cousin, Vilmos Abeles, already 90. Thus began the series of interviews over a five-year period that provided Sigmund Abeles with a treasury of family facts to paint the tapestry of the Abeles family.

Be the first to review “The Fittest Survivor: A Story of Survival and Remembering – from the Holocaust and post-World War II Era –” Cancel reply 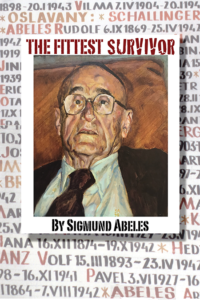 You're viewing: The Fittest Survivor: A Story of Survival and Remembering – from the Holocaust and post-World War II Era – $16.95
Order From Amazon