The Lost Childhood: A Telling Tale Of A Brother And Sister Surviving The War

A Jewish boy, his sister and their mother fight to survive the Nazi occupation of Poland during World War Two. Their father and husband was murdered by the German soldiers. With uncanny ingenuity, and using forged identities and disguises, the three pose as Poles and each finds employment, avoiding capture and certain death.

Included in this important historical account of the Nazi atrocities is the previously unpublished diary that Ilana (Lala) Levron kept during the last days of the Warsaw Ghetto. Her eyewitness notes reveal the struggles of the Jewish fighters and their strength to fight back…to the very end.

The authors also include the fascinating memoirs of two Jewish heroes.

Be the first to review “The Lost Childhood: A Telling Tale Of A Brother And Sister Surviving The War” Cancel reply 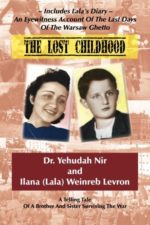 You're viewing: The Lost Childhood: A Telling Tale Of A Brother And Sister Surviving The War $18.00
Add to cart

FREE Shipping in the United States for orders over $50. Dismiss